Yellow Bird is a competitor in the Wings Around the Globe Rally.

Yellow Bird is a racing plane from the US, taking part in the WATG Rally as racer #1/17.

In Planes, he sets the fastest time in the qualifier round for the Wings Around the Globe and competes in the rally.

He is then seen in many shots of the racers throughout the movie, including in the pit row at John F. Kennedy International Airport.

He strangely does not appear with the other racers to give Dusty parts, although he is seen saying that Dusty is back after he was rebuilt.

Yellow Bird is modeled after an Extra EA-300. 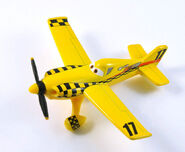 Diecast
Add a photo to this gallery
Retrieved from "https://worldofcarsdrivein.fandom.com/wiki/Yellow_Bird?oldid=57295"
Community content is available under CC-BY-SA unless otherwise noted.